please note jottings by chris macrae washington DC, glasgow, and project wise with social capital in 15 Asian capitals! - all errors ae mine alone (additionally i do aim to rapidly edit out errors and changes etc this version 27 dec 2021)- about 65 years ago my father the economists's norman macrae met John Von Neumann (the origin of Artificial Intel and Industrial Revolutions 3, 4 multiplying the consequences of machines revolutions started Glasgow 1760s) and became his biographer - mediating what will humans do with 100 times more tech every decade appears to be reaching tipping points (to extinction or worldwide community blending with nature)- will millennials be the first sustainability generation? - here are some people who within my spheres of knowledge are helping to answer that question

my parent and common sense is the younger half of the world need a multidisci0plinary multicultural fusion - in 1984 i co-authored the first future report on sustainability to 2025report - I am searching for co-editors of a final Humans & AI edition now -chris.macrae@yahoo.co.uk -safe 2022 everyone

ref ANY.1 https://www.linkedin.com/in/makoto-okubo-38800457/ Mack is a senior figure in Japan Financial community in New York City ( government affairs director Nippon Life ( one of Asia's largest insurance company outside of China.)

Japan (whose innovations my family is in 60th year of journalising) has a very practical approach to  United Nations sdgs- which sectors has it led asean and asian over the last 40 years and therefore how do those sectors benchmark the most sustainable purpose they can serve. NB if you watch nhk cable tv you mack see the sdg logos presented before every mews hour. Mack plays a key role in benchmarking such sector purpose and understanding latest flows from UN New York and Japan Consul

Mack also has a passion - young musicians worldwide- he hosts www.musicforsdgs.com - through covid this has pivoted hosting 24 hour virtual celebrations tied in to major global sdg events Japan partners. One of the innovation is a team of hummers so even if you cant sing or translate you can hum along

ref NYB.1 https://www.linkedin.com/in/wendy-kopp-443a8856/   On graduating from Princeton Wendy Kopp founded a teachers corps - for graduates who wanted to go into teaching why not take a practical year out first improving education in some america's most deprived communities. What began as teach for america.com is now 60 national branches of www.teachforall.org. Wendy says she was inspired by the first wise education laureate that she could both go global and bring up a family of 4 children while her husband runs the charter school Kipp> In December  she received the 10thWise  education laureate-this network began around first lady of qatar a lead sdg advocate and the late great fazle abed whose life's work at brac (helping billion asian village women end poverty, forming largest civic society partnership 80% generated by sustainable  social business microfranchsies (a revokution in aid) ) i file at www.economistwomen.com

X1 UAustin.org is an example of a new university : eg prioritising missing experiential learning curricula such as climate or advances in tech. An Asian graduate making her way inn new york after gaining her MA Economics Columbia Uni we mentor was asking us whether working for Stanford Scot Niall Fergusson would match her Asian american talents. In the process we found that UAustin.org is being co-founded by Niall (more reports om uuastin.org wanted)

Z1 Vincent Chang https://www.linkedin.com/in/vincent-chang-0b256819/ was headhunted by Fazle Abed (Economistwomen.com Abedmooc.com ) to be the first international vice chancellor of Brac University - argaubly the fina and most extensive worlkdwide partnership platform designed by fazle abed with his 50 yeras of empowering bangaldesh women to build the rurla nation and linking the world's laregst ngo /civc society partnership. Ed note we are biassed tovaluing the late great sir fazle abed as number 1 entrepereneurial revolutionary of his era - see www.economistwomen.com for filings of 100 plus unique cases

Z2 J Gifford Pinchot  https://www.linkedin.com/in/giffordpinchot/  originated the field of intrapreneurship 1 2 which my father's Economist Genre helped popularise from 1982; which gives the corporate world credibility in developing futures humans most need - big organisation or an enterprise confederation that can be as startup flexible as 100 times more tech oper decade eeds to be

ref NYB.2 https://www.linkedin.com/in/yasmine-sherif-284a3372/  Yasmine Sherif Director of UN's educationcannotwait is now new york's most connected person in refugee education and feraless on location visitor to manu of hardest places for youth to grow up on earth eg congo, afghanistan.. . A Swedish graduate she has served in over 20 conflict or poorest nations in various missionary roles before becoming the coordinating figure of refugee education during Guterres second and covid's first administration. She makes a strong ally to Scotland's Gordon & Sarah Brown. Sarah was one of the earliest first ladies to form a refugee education network theirworld- since his post as UK prime minister Scot Gordon Brown has served as UN special envoy for education and more recently WHO's special envoy for vaccination everywhere- in december 2021 brown probably linked global education's local future possibilities more than anyone single person. 2022 is interesting in that cop27 is being hosted by Egypt; G20 is being hosted by Indonesia ahead of arguably Guterres most vital summit ever in 2023 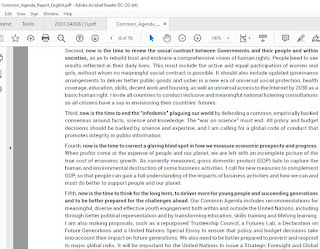 * yidan prize and luminaries out of hong kong;

continuously brown convenes 2 education commissions - one western based ; one asian based epicentre korea; his wife refugee network their world connects with the un's educationcannotwait and qatar's 40 country partners of educationaboveall

ban ki-moon launched sdgs in 2015; this was his last main action ; guterres led un since late 2015

In 2018 summer at unctad geneva digital cooperation report announced; I mage contact with its 2 project managers - they were goven a 20 country panel - china jack ma; usa melinda gates; it was supposed to convene twice and produce an action report by spring 2019 ; instead they diluted the process and it then got elongated- by april 2020 guterres was convening tehse hi level panels https://www.un.org/en/pdfs/List-of-Roundtable-Participants.pdf

and at virtual unga septemebr both a un2.0 and a fintech report was issued

ref AYUAE1 Abubakr https://www.linkedin.com/in/abubakr-abdalla/ is in Dubai in about his tenth year researching what would a leading entrepreneur/teenage campus for sudan youth look like. He has followed a scholarship that started with the commonwealth led to a period in malaysia where he found an extraordinary campus that empowered teams to go on 6 month exchange schemes for engineers - he joined tw : one to japan and one to china. He more or less knows what he would like to build in Sudan but is in Dubai to fundraise as well as keep touch with technology. Dubai is and has been an exciting young space as it has prepared fro th 6 month expo which in Spring 2022 it will handover to Japan. What with the Olympics not being a global exchange due to covid; Japan hopes to celebrate youth futures for real in 2025

ABar1 Marta Vernet    https://www.linkedin.com/in/marta-vernet-yll-b735b18/   leads a team of win-win educators special projects and impact of international teenagers. Her day time job (over decades) is to organise a community service project for every child at american international school of barcelona. This has been her life's work. I was privileged to network with Marta at 2 Wises Madrid & Qatar 2017 AIB's highly privileged Teens (as well as a few with scholarships) approaching 10th to 12th grade are often looking at either the worlds top universities or SDG startup network opportunities connecting what millennials may courageously do with diplomacy or multi-continent cultural security (most aib youth are multilingual). In the early 2000s barcelona was recognised as europe's knowledge collaboration city of the year and along with Rome and Glasgow remains one of the premier league of community-grounded entrepreneurial networks and leaders of sustainable fashion movements. (NB as a diaspora scot i have a bias in europe to connecting cities where youth entrepreneurs are freest from top down bureaucracy : barcelona and rome premiosciacca.it keep fransciscan community building spirit alive while smithian morality of human development remains the worldwide collaboration movement both sides of my family tree have committed to through generations)

X2 John Bunzl  https://www.linkedin.com/in/john-bunzl-226672172/#  founded simpol.org to free globally minded voters to maximise nlocal policies. Whilst London based I represented Simpol at the year of making poverty history series of events; these began with Nelson Mandela's visit to London ad effectively ended with 7/7 where one of my closest associates was assassinated - rip colin

AWom1 https://www.linkedin.com/in/nailac/ From the late 1990s Naila Chowdhury led the field implementation of muhammad yunus grameen phone village ladies -one of the earliest leapfrog networks of tech and rural village life in asia. Her father also ran a civil engineering company which  she retains responsibility for. She moved to Maryland in 2010 from where she has become a leading motivational speaker for womens empowerment and continues to mediate womens fintech.